In Honor Of Our Fallen HERO 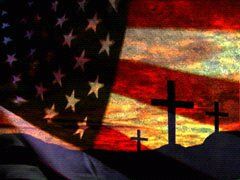 Frank Draper could hit, run and field with the best of them. He also became a fine soldier. Frank Draper was one of the Bedford Boys. 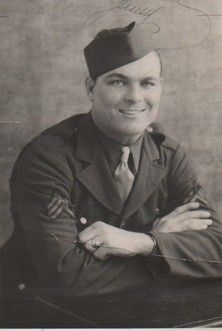 Frank P Draper Jr was born in Bedford, Virginia on September 16, 1918. Times were hard for the Draper family but the boys - Frank, David and Warren - had baseball to keep them busy. "When we were growing up in Bedford," recalls David Draper, "There wasn't much going on here for young people, so from a young age [Frank] was always playing sports in and around Bedford. That's how he became such a good athlete."

Frank played baseball for Mud Alley - a tough neighborhood team and starred with Bedford High School in baseball, football, basketball and track. Later on, he became the center fielder and lead-off hitter with the semi-pro Hampton Looms team, the areas largest employer. Batting two and three for the team were his brothers.

Draper, like many of the local youngsters, was also a member of the local National Guard - enticed by the promise of a dollar every Monday night after marching practice at the Bedford Armory. 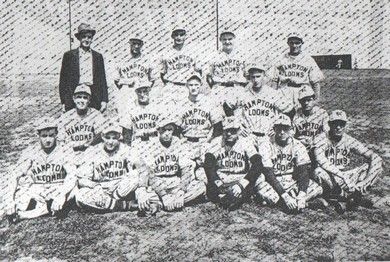 As the war in Europe took hold in 1940, the United States began to expand its fighting forces. In October, it was announced that Bedford's National Guard Company A would be mobilized into the federal Army for a period of one year.Four months later, on February 3, 1941, Draper and the other members of Company A reported to the Bedford Armory where they were issued new uniforms and sworn in. They were sent to Fort Meade, Maryland, home of the 29th Infantry Division where they were taught to be soldiers.

It was while returning to Fort Meade from military exercises in North Carolina that news of the Japanese attack on Pearl Harbor reached Draper and the boys of Company A. It ended all hope of being home in a year - Draper was now in the Army for the duration. But the Army proved to be the making of Frank Draper. He was resourceful, calm and decisive under pressure. He kept a diary detailing his duties and responsibilities and quickly attained the rank of sergeant. 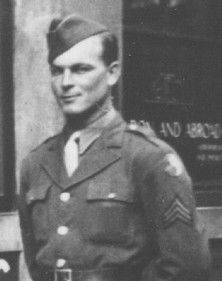 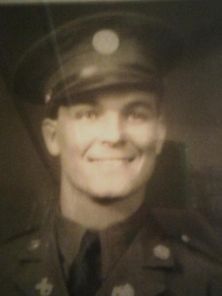 In August 1942, the 29th Infantry Division left Fort Meade bound for Camp Blanding in Florida. Less than a month later they were preparing to move out although they had no idea where they were going - the Pacific or Europe. "The last time we saw Frank was September 1942," recalls his sister Verona Lipford. "My mother, Frank's girlfriend and I, went to Camp Blanding to see him before he shipped out. He left our motel that evening as jovial as always." 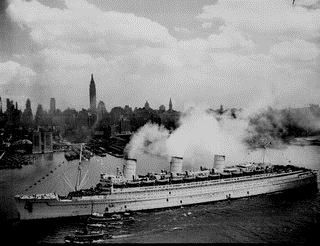 The 29th boarded a train that took them to Camp Kilmer, New Jersey - staging post to Britain.A total of 11,000 troops boarded the Queen Mary for the Atlantic crossing with an escort of five destroyers and a British cruiser, HMS Curacoa. As the Queen Mary approached Scotland it was the Curacoa that guided her to the Forth of Clyde. It was a routine operation but at 2.12pm on October 2, 1942, disaster struck. The Queen Mary collided with the Curacoa. The Queen Mary suffered minimal damage but the Curacoa sank almost immediately from the impact of the huge ocean liner and 338 lives were lost. Shaken, but safely on dry land in Scotland, the 29th moved by train to London and from there to Tidworth Barracks just ten miles from Stonehenge. The 29th had begun their training program in October 1942 and it would last until May 1944 - the longest of any US infantrymen in World War II. 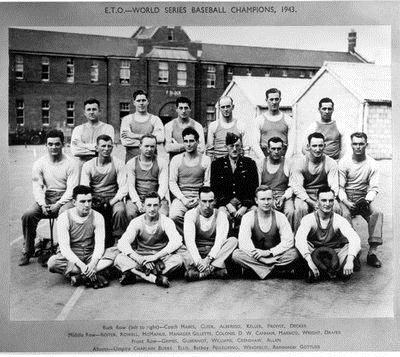 But Draper still found a little time for baseball. In September 1943, he played for the 116th Infantry Regiment Yankees in a four-day tournament in London. The 116th were a darkhorse team at the outset - unknown to many of the other teams who were playing in well-established military leagues around Great Britain. Draper, together with Bedford boys Elmer Wright and Tony Marsico, were the backbone of the team and Draper collected three hits, including two triples in the 6-3 final against 8th Air Force Fighter Command that saw the 116th Infantry Regiment Yankees crowned ETO champions. That was to be Draper's last chance to play baseball. For the remainder of 1943 and the first five months of 1944 it was intensive military training in preparation for the invasion of mainland Europe.
But like most servicemen overseas, Draper's thoughts were often on the things he missed back home, as can be clearly derived from the poem he sent home:

I'm sitting here just thinking,
Of things I left behind.
A girl with brown eyes gleaming,
Of Mother so good and kind.

We miss our Mother's tender care,
We miss Her apple pie,
She's the best one of them all we swear,
And we couldn't tell a lie.

Nothing compares to a loving mother,
To her kindness and concern,
Once she's gone, there is no other,
For her we'll always learn.

When all the world is bright once more,
And full of smiling faces,
We can all go back to the old home shore,
Back to familiar places.

When all this strife is over,
After the peace is signed,
We'll forget the planes o'er Dover,
Forget the Nazi whine.

These humble lines I pen to her,
While far across the sea,
Wishing that I'd never stir,
From the land that's home to me.

So again your loving boy will say,
There's none so good and kind,
We'll meet again some happy day,
far across the Ocean's brine. 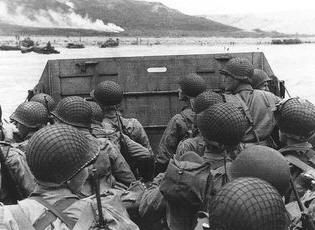 On the morning of June 6, 1944, Technical Sergeant Frank Draper was on a landing craft heading for Omaha Beach at Normandy. Company A of the 116th Infantry Regiment were to lead the assault on D-Day.

As the landing crafts approached the beach the enemy opened fire. Draper's craft shook with the impact of an anti-personnel shell that tore off his upper arm as he stood in the middle of the craft. Rapidly losing blood, the young soldier slumped to the floor. 10 The fleet-footed outfielder from Bedford, Virginia was dead. 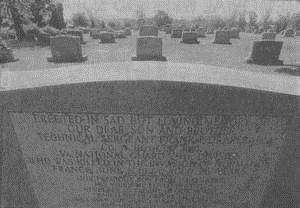 It was not until July 16 that news of the horrendous losses suffered by Company A reached the tight knit Bedford community. Nineteen Bedford boys died in the first bloody minutes of D-day. Two more died later in the day. No other town in America suffered a greater loss.

To mark Frank Draper's 26th birthday on September 16, 1944, his mother sent a memorial letter to the local newspaper:

I can't even see your grave except in a dream. Now my mind wanders thousands of miles across the mighty deep. To a lonely little mound in a foreign land where the body of my dear soldier boy might be lain away. This tired, homesick soldier boy who attended church in Bedford all his life. He was not buried in a nice casket, flowers and funeral procession. His dear body was laid to rest in a blood-soaked uniform. Maybe it was draped in an American flag. There will not be any more cruel wars where you have gone, dear Frank...The old rugged cross has a two-folded meaning for me, for my own dear boy shed his precious blood like Jesus on the cross at Calvary. For our religious freedom, they say. A dear price to pay. In 1947, Frank Draper's body was returned to Bedford and now rests at Greenwood Cemetery .On June 6, 1954, ten years after the tragic losses at Normandy, a memorial to the Bedford boys was unveiled in the town. On June 6, 2001, the national D-Day Memorial was opened in Bedford.

The 1943 ETO (European Theater of Operations) World Series was held in England over a four-day period at the Eighth Air Force Headquarters, Bushy Park, London. Starting on Monday, September 27 and concluding on Thursday, September 30. The event featured 20 teams from all across England and Northern Ireland, and was arranged by Major Donald Martin (ETO Special Service athletic officer). Each team was permitted a roster of 15 enlisted men and one officer.

Favorites to win the tournament were the CBS Clowns, led by Second Lieutenant Charles “Chuck” Eisenmann, formerly of the San Diego Padres.

In the preliminary round on September 27, the games went as anticipated. The CBS Clowns beat the Signal Hounds with Eisenmann striking out 19; Mauro Duca hurled a three-hitter for the Fighter Command Thunderbolts over the Port Ramblers; Fran Hecker of the ASC Angels beat the Yanks, 7-5, and Carl Smith of the Agitators beat the Signal Company Dodgers, 2 to 1, in 10 innings, striking out 21 along the way.

There was, however, one surprise. A previously unheard of team called the 116th Infantry Regiment Yankees beat the Bomb Group Moles, 4 to 1, in 11 innings, with Elmer Wright outdueling Joe Rundus. The Moles had been tipped to be semi-finalists at least and were shocked to be out of the tournament at such an early stage.

The second round of preliminary games on September 28, saw the CBS Clowns trounce the Air Support Command Eagles, 7 to 1; the Fighter Command Thunderbolts overcome the Agitators, 2 to 1, and the darkhorse 116th Infantry Regiment Yankees cruise past the Derry Marines, 9 to 1.

In quarter final games on September 29, it took 13 innings for the 901st Engineers to defeat the ASC Angels, 3 to 2, while the 116th Infantry Regiment Yankees disposed of the Service Command Red Devils, 5 to 3.

Later the same day, Doug Gillette hurled the 116th Infantry Regiment Yankees into the finals by defeating the 901st Engineers, 7 to 3. But the real upset of the afternoon was the 3-2 defeat of the CBS Clowns by the Fighter Command Thunderbolts. Mauro Duca scattered six hits with nine strike outs while Chuck Eisenmann struck out 15 in a losing cause.

The final on September 30, proved to be a thrilling affair between the 116th Infantry Regiment Yankees and the Fighter Command Thunderbolts. Elmer Wright - formerly with Jackson of the Southeastern League was the starter for the Yankees, while the Thunderbolts went with Mauro Duca, who had previously pitched for Twin Falls of the Pioneer League.

The game was scoreless for three innings. The Thunderbolts managed singles off Wright in the second and third innings, but without success. However, they scored a run in the fourth on a walk, a single and a double and Doug Gillette - who was catching for the 116th and had pitched in the minors for the Greensburg of the Penn State Association in the mid-30s - came to the mound and let in two more runs on wild pitches.

The Yankees were quick to respond in the bottom half of the inning, tying up the game by scoring on two doubles, a single and a base on balls.

With the score tied, 3-3, the Yankees took the lead in the sixth when two men were safe on errors and scored when a batted ball got past the second baseman and went into right field. They tallied again in the seventh, Frank Draper of Bedford, Virginia, getting his second triple of the game, but was out at the plate trying to score when Joe Gubernot of Shamokin, Pennsylvania, hit to second. In the seventh inning, Gubernot came home on an error at first for the final tally of the game and Gillette pitched shutout ball for five innings to give the Yankees a memorable win and the ETO World Series crown. 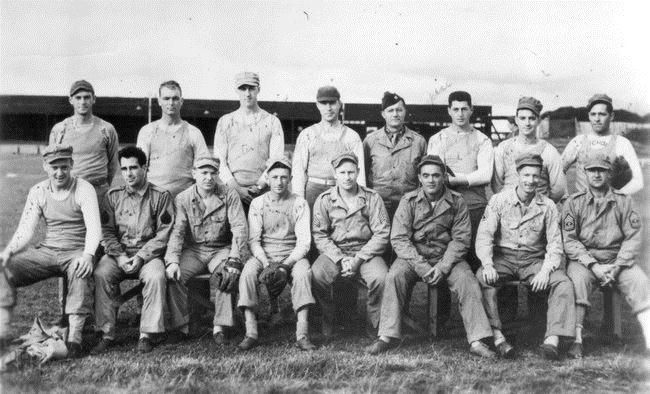 Eight months after the 1943 ETO World Series was played the 116th Infantry Regiment Yankees were in a different kind of battle. They were among the first troops to land at Omaha Beach, Normandy, on June 6, 1944.

Frank Draper, who hit two triples in the series final; Elmer Wright, who pitched so effectively throughout the tournament; and Louis Alberigo, who played third base and had two hits in the final, all lost their lives on the beach.

Catcher Robert Marsico and first baseman Carl Proffitt (who was awarded the Distinguished Service Cross for gallantry) were wounded and evacuated to military hospitals in England.

Remembering baseball players who made the ultimate sacrifice for their country 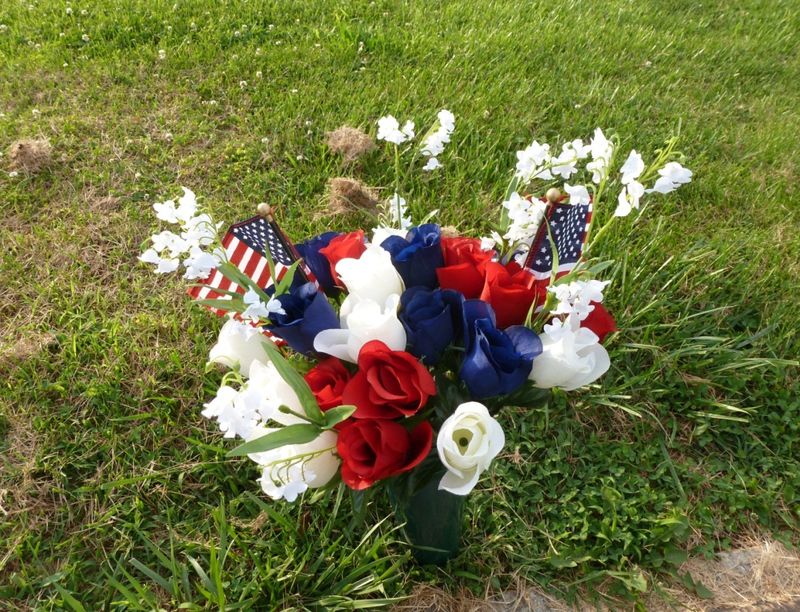 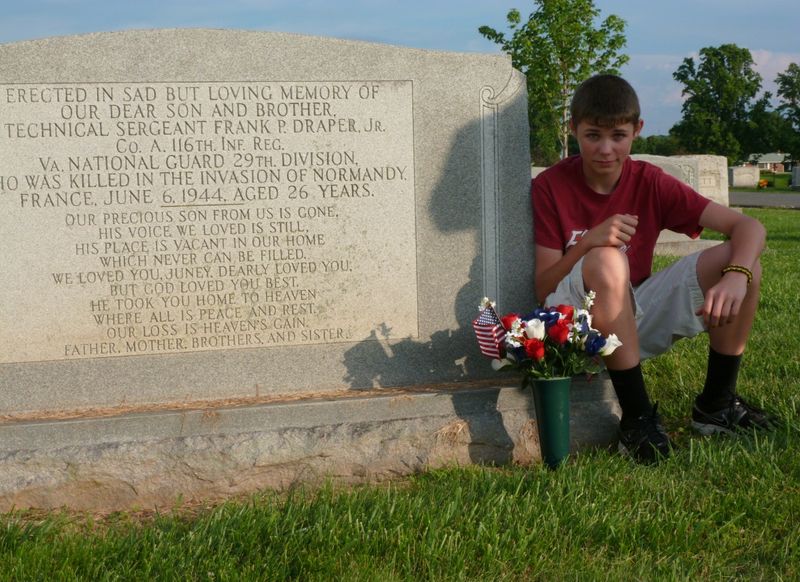 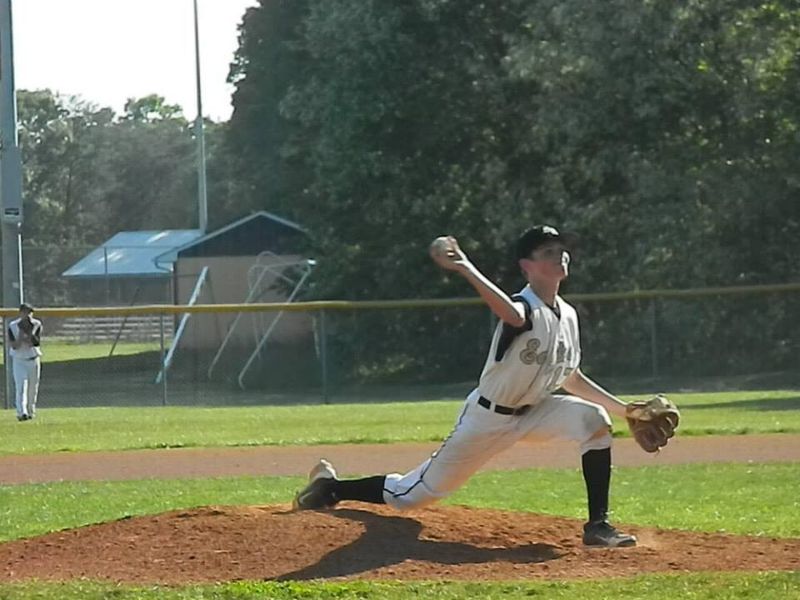 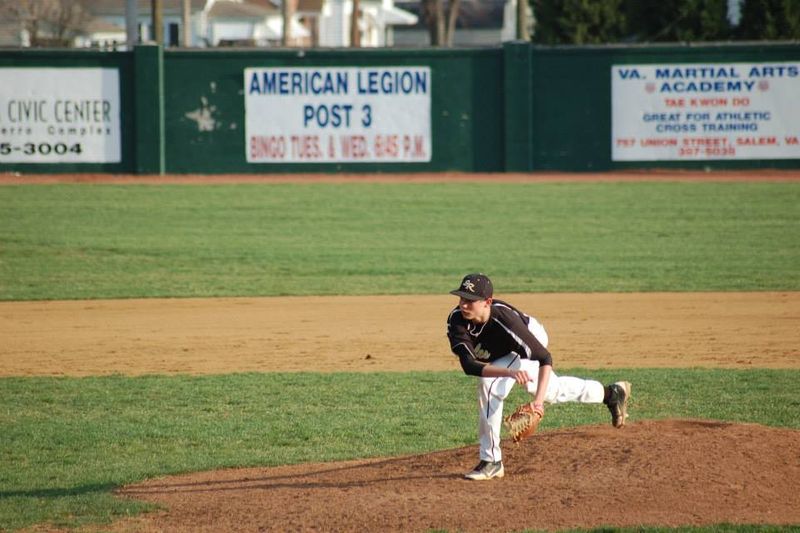